Exercise is not fun,

but training is. Don't get me wrong, training does have its moments of total sucksville, but it's fun in a sick way. Getting that long run in, when every fiber in your being is screaming "I don't want to!". Noticing the improvement, either the lower heartrate, the faster times, the further distance. Creating the training plan is fun, especially if your are a spreadsheet geek. Someone recently mentioned tracking and comparing rival's times - that sounds like fun too.
But this weekend, so far topped them all. 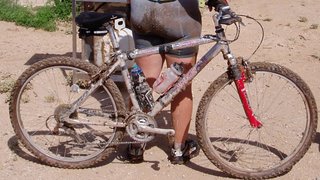 If I wasn't training I would have turned back, in fact if I wasn't training I probably wouldn't have even gone. Since my next tri is an off road, my brick this weekend was a trail ride and run. The bike trail - the same ride to the river regardless of wind, or uphill or downhill. The trail - 1.5 miles north from my house on paved road, turn east on a rocky, caliche, crappy road for .5 mile (+/). At the fork in the road, veer right into the Brantly wildlife reserve. Head east southeast (~4 mi)toward the Pecos River. Didn't make it - mud bog. Yes it has been raining a bit lately down here, and yes I have blonde hair. Hit the first mud puddle, sprayed mud everywhere almost squeeled out loud in glee. Next - very large puddle, or rather mini-lake. Had to bail off the bike when I stopped in thigh deep water! Walked through it and continued while laughing out loud. Lots of mud puddles and a fall into the squishy stuff, and I turned around.
Talk about resistance training, try riding with 5 tons of caked mud on your tires, mashed around your brakes, on your shoes (forget clipped in). 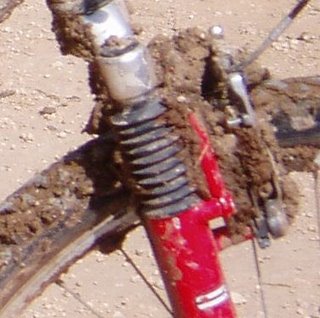 Anyway I had a blast. The pictures don't do justice as alot of the mud came off when I went back through the mini-lake, and on the paved road. I didn't practice my transition as I had to get Jeff to take pictures, then I had to find dry socks. I did do my run with my trail buddies: Jethro, Homer, and Jo. Jethro and Homer are Catahoula/Cur and Jo is a Blue Heeler/Dalmation. Great dogs. Jethro and Homer are my buds and don't leave my side for too long. Though none of the dogs noticed the snake I almost stepped on, but that is why God gave me eyes. Not sure what kind of snake, didn't stick around to find out, but every stick, and mesquite root after that were potential snakes after that.

It gets better. Later that day I had some unscheduled weight training. We own a piece of crap. Basically it is a '79 motor home that has become our money pit. It has a tendency to leave us stranded or make us turn around and limp home on many occasion. Why Jeff hasn't sold the thing... Anyway my sister-in-law wanted to borrow it while she completes here Master's down at Sul Ross State University is Alpine, TX. She paid for the latest fix which was a rebuilt caburator. Jeff was feeling pretty confident that this was going to do it. Regardless of his confidence he decided to haul it down there instead of driving, due to logistics, fuel prices, etc. So Saturday afternoon we took our one ton dodge with the 35' flatbed trailer over to an area a few miles from home where we could back it up to an embankment of sorts and then drive the moterhome onto the trailer at a more level grade (the dove tail is rather steep for the length of the moterhome and we'd drag bottom way before we got it on).
Unfortunately the crappy side of the thing reared its ugly face. The stupid thing didn't have the huevos to get up the small incline and it blew out the gaskets, meaning no power whatsoever. So we had to assist it onto the trailer using a comealong. I chose to man the comealong, since Jeff is familiar with the engine and such and knows how hard to push the engine, when to stop,steer. Decided I'd rather have him run me over then me run him over. So I tugged on the comealong and he coaxed the piece of crap up onto the trailer. I wouldn't have been much help 6 months ago, but I was able to hold my own. My whole body was shaking from fatigue when we were done, but I wasn't that sore the next day. I'm feeling kind of proud of myself. He got it down there for her, fortunately she doesn't have to drive it. Meanwhile we've got 4 months to decide what to do with it. Jeff's latest thought - turn it into a fifth wheel trailer. Cut and weld - oh yeah!
Posted by ShyTriGirl at 8:06 AM