Quick post about SuperDad. Late last night in and amongst our insomnia (Sunday nights are terrible for that) we were discussing what to do about this coming Sunday's Triathlon. He's leaving for a deep sea fishing trip Wednesday through Saturday, and is making a concerted effort to get back early enough Saturday to jump in the truck with me and the boys and head to Alamogordo for the Stealth Triathlon on Sunday.

It is my nature to not be an inconvenience to anyone, to take care of everyone else first (I know, I know...but I'm a pleaser...). So I offered to go by myself so that he could stay home with the boys, he'll probably be tired from his trip and want to cool his heels for a while. I can only imagine how trying it must be to entertain a two year old and four year old for 2-3 hours while their mother is off swimming, biking and running. He's a champ and does it well, but still I feel guilty and am sure he'd rather be at home. I've communicated this concern to him before and again last night. I even tried to get out of doing this one, thinking it was too much with his trip, and carting the boys around again, but he encouraged me to sign up. Last night he told me that he likes to come and support me, that he tells everyone what his wife does. He said He's proud of me. Wow - how much does that mean to this shytrigirl. 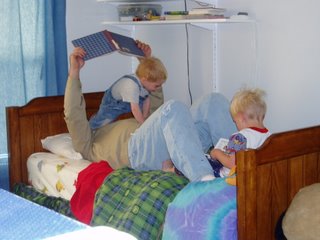 On a similar note - my eldest son was pretending yesterday afternoon. "Watch me mom, I'm racing." Off he goes swimming, then stopping and changing shoes for the bike ride and changing them again for the run. At one point during his swim he stops and is breathing heavily, "got to watch out for the sharks." Sharks? How does he know my dream triathlon is the Escape from Alcatraz Triathlon?
Posted by ShyTriGirl at 12:10 PM

It sure does feel good when the SO tells you they're proud of you, doesn't it? That's so cute about your son doing his pretend tri. if you keep your eyes and ears open, you can get him signed up for little ones next year. Most of them let moms and dads run next to them for help, even on the bike.